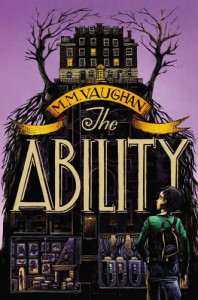 This book was such a mess. I was so disappointed. I think it was a great idea, but it was poorly executed.

First of all, I feel like this is a copycat of Harry Potter. Both are about 11/12 year old boys in England who suffer from parent/guardian neglect. They both get invited to a special, secret school. There is a mean teacher who torments them and a principal/headmaster who is like a father figure. But Harry Potter is an infinite number of times more amazing than the jumbled mess known as The Ability. Christopher Lane, as well as the other students, are NOWHERE near as lovable as Harry, Ron, Hermione and the other Hogwarts students. Sir Bentley and Miss Sonata and the security people aren't as interesting as the teachers of Hogwarts. And Maaaaaan, those twins Ernest and Mortimer, and their mother, they don't know jack about being villains. They should start with either having a legitimate excuse to being vengeful, or proving beyond a reasonable doubt that they are twisted and crazy! You think they're villains? I'd like you to meet Voldemort.

Even if it wasn't a carbon copy of Harry Potter (although, admittedly, there were a few differences), it suffers from a snooze-inducing beginning, lame villains, flat characters, flat writing.... It's not too bad, it's just so BORING.

It ended on a cliffhanger, so maybe it's intended to be that way? To just set the stage for a series? But even if it's the first book, I still would like an author to have the first book more polished. I might read the next book to see how things turn out. But probably not. We shall see.