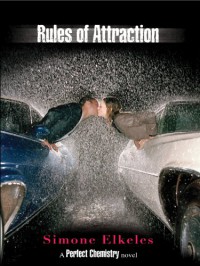 Edit: After re-reading Rules of Attraction on 9-24-13, I am rewriting my review. Here it is;

I really liked Rules of Attraction a lot, more than the first book I think. Carlos and Kiara were the cutest couple!! I really liked Kiara, she was a good sister, she's sweet and innocent, but she's not afraid to get her hands dirty- she's a hard worker. And Carlos, well he was kind of a jerk in the beginning, but for some reason I think I like him more than Alex. I liked Alex in the first book, but in R.O.A, he was kind of annoying. So yeah. Carlos is my favorite Fuentes brother. Tuck, Kiara's best friend, was cool too and I liked how he was such a good friend to Kiara. I liked how Kiara's parents were so welcoming to Carlos and were supportive of him. I loved all the characters.

There's just one tiny thing that bothered me; Carlos had no best friend. In P.C, Alex had Paco and Brittany has Sierra. In this book, Kiara has Tuck. But Carlos had no one. Well, maybe Ram, but he doesn't count because he wasn't a major character.

Other than that, I really enjoyed R.O.A and I recommend it to those who loved Perfect Chemistry and want more of Simone Elkeles's writing.
Tweet
794 BOOKS