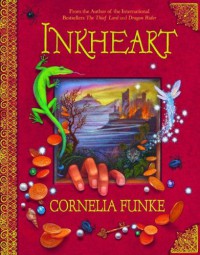 Inkheart was a very creative story. Meggie learns, after a mysterious stranger named Dustfinger randomly shows up at her house one night, that her father Mo can "read" characters out of books. Nicknamed "Silvertongue" whenever he reads a book aloud, the characters come out of the book and appear in the real world. Many years ago, Mo (short for Mortimer) read aloud a book called Inkheart to his daughter Meggie and his wife Theresa. The villains of the story came to life in the real world, and Meggie's mother was sucked into the story. Now, the villains who he originally read out of Inkheart are now looking for him and Meggie.

I really enjoyed this book, but there is one thing I could not get: in the blurb, it says Meggie is twelve. Twelve years old. Meggie acts way older than twelve (and in the movie, she also looks and sounds older too). It would made way more sense if she was fifteen, at least. But, that's my only complaint. Other than that, I highly recommend Inkheart. But, a warning; I do NOT recommend Inkspell and Inkdeath, the sequels. I felt that they weren't as good. I just didn't like those. But these are my feelings. You do what you please.
Tweet
794 BOOKS