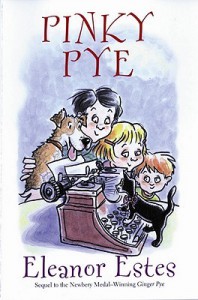 I read and enjoyed Ginger Pye and have long awaited this sequel, Pinky Pye. It wasn't a bad book. It just could have been so much better.

Here's the problem: it's too simple. Which is why I put on my "for-younger-kids" shelf and not on my "middle-grade-juvenile- fiction". The writing was SO simplistic, even more so than Ginger Pye. And my other main complaint: there's no problem, no crisis that they have to resolve. It's kinda boring. The Pyes go to Fire Island for vacation because of Mr. Pye's work as an ornithologist. They adopted a kitten and name it Pinky. Pinky Pye. She's so smart, she can type! But, from there, the story gets SO boring. There's that whole deal with the owl, but it doesn't have anything to do with Pinky's ability to type. You know what would make a good story? If somebody found out about Pinky's typing skills, thought he could make some money, and kidnaps her for his own nefarious dealings. But, alas, that did not happen. I won't say anymore because I don't want to spoil everything, but it's just so boring!

This is a children's book, meant for readers 8 and up, so I guess my expectations were too high. I am older than the intended age group, after all. But I can't give it more than three stars. The rating reflects my own personal enjoyment, NOT the quality of the book. If you a) are in the intended age group, ages 8 and up, and b) read and enjoyed Ginger Pye, then I recommend Pinky Pye.
Tweet
794 BOOKS