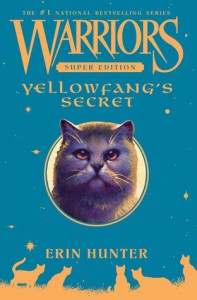 Edit on 8/27/13: When I first read this book, I really liked it. Upon reflection, I realized I didn't like it as much. So, I have changed my rating from four stars to three stars. I have also edited the original review to fit my current reading.

Warning! There will be spoilers.

One of the few Warriors books that takes place outside of ThunderClan- taking place in ShadowClan and tells the story of Yellowfang.
It was a pretty decent book but I had a few problems with it:

1. Yellowfang's character. Yellowfang's character in this book was very different from the Yellowfang we know and love from the original series. In the original series, Yellowfang is a old medicine cat with a sharp tongue, and is cynical yet kind. She is tough. She is cranky some times, but is also nice at others.
In Yellowfang's Secret, none of her original character/personality remains. I expected her to be sweet as a kit, and as she grew older, her original character would slowly come back. Here's what I got: she is completely different till the end, where she meets Fireheart as an apprentice. At that time her original personality comes back, which felt weird because she had a completely different personality for the majority of the book. It's not like I disliked her character in this book, it's just that it felt weird. The other characters (except Brokenstar and Raggedpelt, but I'll talk about them later) were good. I have no complaints about them.

2. Raggedpelt and Brokenstar. The two characters I hated the most. In the original series, I thought of Raggedpelt/Raggedstsr as a noble cat who was a great leader and a loyal warrior to ShadowClan. But now, all I think of him as is a mean jerk face. I swear, he was SO rude to Yellowfang. In Some parts he was sweet and kind to Yellowfang, in others he was SO mean to her! He persuades her to continue dating him once she becomes Sagewhisker's apprentice even though HE KNOWS IT'S AGAINST THE MEDICINE CAT CODE. Later, when Yellowfang had to break up with Raggedpelt to become a full medicine cat he makes a big deal out of it, forgetting that THIS IS ACTUALLY IMPORTANT TO YELLOWFANG! Instead of being gracious and understanding, he throws a fit. Also, when Yellowfang is pregnant with Brokenstar and she tells Raggedpelt, he's all excited to be a father. Which is nice. Then he realizes that he will have to raise Brokenstar alone because Yellowfang is staying a medicine cat. Instead of being sad, but realizing she has a DUTY TO HER CLAN, he calls her selfish. She chose to give up her only baby because of her loyalty to ShadowClan and he calls her selfish. REALLY??? It was sad to see their relationship unfold because I could see that Yellowfang loved him. But sometimes he acted like he didn't love her and had no respect for her. Shame on Erin Hunter for tarnishing noble Raggedstar's name! Now, Onto Brokenstar. Sometimes, I would like to see another side of a villain, to see their motives and such. This would've been a perfect opportunity to do that. But it didn't happen. Sure, Brokenstar's foster mother was mean and all, but the author(s) made it seem like he was just born evil.

I guess those are my only complaints about this book. Well, those above and the fact that it was so sad. Depressing. I originally enjoyed it enough to give it four stars, but with all my complaints, I just had to give it three stars. But because of my love of the Warriors books (the majority of them anyway. I have to admit I didn't like all of them), I won't give it two stars. Although, honestly it deserves that.

If you are one of those die-hard Warriors fans, then by all means read Yellowfang's Secret. But just know that it wasn't that good. Other Warriors super edition books are better. (Recommendations: Firestar's Quest, Bluestar's Prophecy, Crookedstar's Promise).
Tweet
794 BOOKS