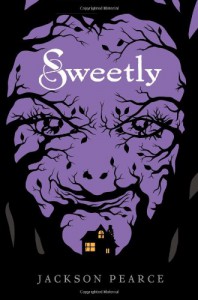 I had a hard time writing a review for this. I don't have any strong feelings attached to Sweetly, so I don't quite know what to say.

Let me start with the good. Jackson Pearce's writing varies for me; in some of her work, it is subpar (Sisters Red), in some it is amazing (As You Wish). In this particular book, it lies somewhere in the middle. Decent, but not quite as good as some of Pearce's other books.

I also like Sophia's character. She was a very complex individual and her backstory would make a great prequel/companion novel.

But the rest of this book... It wasn't bad per se. It was decent, but in the end ultimately forgettable. Gretchen, Ansel, Samuel.... None of these characters stood out to me. Gretchen in particular wasn't a very interesting protagonist.

I also wish that, both in this book and Sisters Red, Pearce had created an alternative universe rather than setting it in the United States. Whatever, it's a minor complaint.