Strands of Bronze and Gold 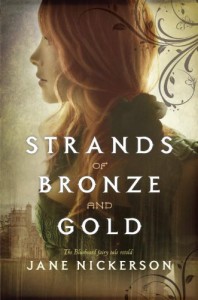 If I had to sum this book up in two words, it would be this: EPIC. FAIL.

This book could have been awesome, and then it crashed and burned. Shame.

Problems I had with this book:
1. Pacing: Pretty much nothing happens until the end, and it wraps up too quickly. The author should have spent some time building tension and character development in the beginning, and then more action in the end. Instead we get approximately 300 pages of endless descriptions of clothing and places, and random, pointless filler scenes. And then 30 pages of action and a hasty, rushed conclusion.

2. Sophia. She was a Mary Sue. Throughout the whole story, there are signs that everything is not as it seems and she stays there! She was so dumb, and had a bland, boring personality. Not to mention the Sophie/Sophia confusion.

3. Bluebeard. Or Bernard de Cressac. He was so creepy and, again, the things he said and did should have clued Sophia in that she couldn't trust him. Nothing redeeming about him at all. He could have been a complex, interesting character. But he turned out to be a creepy pervert.

4. The rest of the characters. There is like, 50+ servants, and none of them knew about Bluebeard's secrets, or were afraid of him at all? Come on, they couldn't have been that dumb! Not to mention that none of them had personalties. Except for maybe Odette and Talitha. Wish there was more about them. And poor Odette met such a tragic end! I wish she had a happy ending. Same for Buttercup the cat. His death made me almost cry, and it was both cruel and unnecessary. Shame on author for including an unnecessary scene of animal cruelty! Then again, animal cruelty is never necessary, but still. Author could have done away with that part.

5. Setting. Author obviously was indecisive about setting and so readers get a bizarre warp of the Deep South and Europe. For example, our protagonist Sophie is a Yankee, there are African-American slaves, the housekeeper is British, Bluebeard is a Frenchmen, all of the dead wives are European (French, Russian and Irish) and there is a Chinese butler. You can set the story in the Deep South, or you can set it in Europe. But you can't have both!! It would have made more sense to set it in Europe, as the majority of characters are European and the subplot with slavery only serves to make Sophie seem like a good person and Bluebeard seem evil.

And that's it. But those are some major problems. I cannot in good conscience recommend this book. Sorry. Believe me, I wanted to love this book, to be able to gush about how wonderful it was. But I didn't not love it, or even mildly like it. Disappointing.
Tweet
794 BOOKS