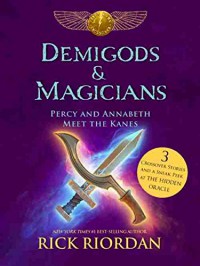 I really enjoyed The Red Pyramid, and I grew to love the Percy Jackson and the Olympians series. I was very excited for this crossover. But, idk, it just wasn't as epic as I thought it would be. I guess it's because it was so short. Or maybe because there's more of an emphasis on Carter and Sadie's story/Egyptian mythology rather than the Greek aspects.
It was enjoyable, but I don't know if I would recommend it.