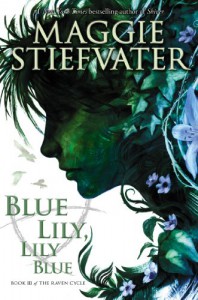 I still love the characters. I love Blue's fierceness and her uniqueness and her Blueness. And she's short. As a fellow short person I empathize. In short (no pun intended, haha), Blue is amazing. I'm finally starting to warm up to Adam. Ronan is so angry all the damn time and it's kind of scary but also you can't help but love him. Gansey is still Gansey. Noah is adorable, but I wish he was more present. There's also lots of new characters, who are awesome. Except for Colin and Piper. They're kind of funny at times, but mostly I just want to kill them.

I have a confession to make. The only reason I started reading this series is because I heard about the romance between Adam and Ronan while reading reviews for The Raven King. And there's finally a few moments in Blue Lily, Lily Blue! No kisses in this one, but I'm almost there!!

THAT ENDING!!! NO!!!!! Curse you, cliffhanger! Thank god I have The Raven King on hold at the library. I'M COMING FOR YOU, THE RAVEN KING! I'm so close!! Now I have it checked out from the library and I'm SO EXCITED.

While I really like this series, I have never given any of these books more than three stars. And I feel bad, I really do like this series. Something just feels missing though. But, for now, I'm giving Blue Lily, Lily Blue four stars. Maybe that rating will change, but for now four stars it is.

Tl;dr version- Ugh, I really like The Raven Cycle. Amazing characters, and I'm so psyched for some Ronan and Adam moments in the next book. Plot can be confusing at times, but overall I really enjoy this series. I'm excited for the next book but I'm also sad to see it end.