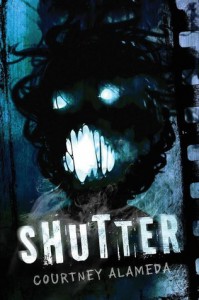 Whew! This took me a long time to read, but I actually ended up really liking it. I don't read a lot of horror, as I am a wuss scare pretty easily, but Shutter came highly recommended so I decided to give it a try. And I'm glad I did! Although the first few chapters didn't immediately grab me, I became enthralled at the start of the second section and ended up really liking it.

Micheline and her crew were delightful to read about! All of them had such distinct personalities and never were boring and I just loved all of them. Micheline in particular I really liked, and I cried

at the end when the identity of the ghost was revealed. Micheline's story was so sad and I felt for her.

Despite what she went through, she's tough and gritty and savvy and I liked her a lot.

I liked the style of writing too. It's dark, gritty and creepy, but also slightly eerie. It fits the story well. This world of monsters and ghosts that Alameda created is also really cool, and although sometimes I was confused about the different technologies used to defeat the ghosts, I thought it was really cool.

Overall, I really enjoyed this. So why not five stars? As always, I have an issue with the romance. Ryder was never my favorite character, but I liked him well enough. I just don't like the romance between him and Micheline. In general, I don't like usually like romance, so unfortunately I took off a star for that.

But other than that, I really enjoyed reading Shutter and I recommend it if you're looking for a good YA horror novel.