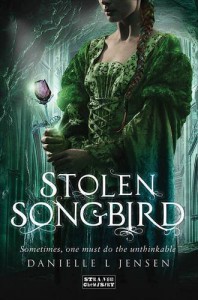 I received a free copy of Stolen Songbird (won a giveaway) in exchange for an honest review. This didn't affect my rating/review in any way.

This was a decent fantasy read, but I wasn't blown away by it, which is slightly disappointing. Stolen Songbird wasn't bad at all, but I did have issues with a few things:

•The first is a minor thing, but....Cécile's hobby of singing has barely any relevance to the story

•Sometimes, Cecile is great. She doesn't take crap and speaks her mind. But other times, she is helpless and I was rather annoyed by that. Adding onto that- Cecile is a likable protagonist for sure. But I didn't have a special connection with her either.

•Most of the book is narrated by Cecile. But a few chapters are narrated by Tristan. I hate when a story is told through multiple POVs, but one POV has more chapters than the other(s)

•The romance is abrupt. I wouldn't call it instalove per se, but it doesn't feel realistic either. They don't spend enough time together, and they argue a lot. So I don't understand how/why Cecile fell in love with Tristan

But, I did really enjoy Stolen Songbird for the most part. Cecile, like I said, is a likable protagonist, I do like the love interest Tristan and the twins Victoria and Vincent are hilarious. The world building is really good too; I found the city of Trollus to be fascinating.

This was a pretty good fantasy read and it was good enough that I'll check out the sequel.