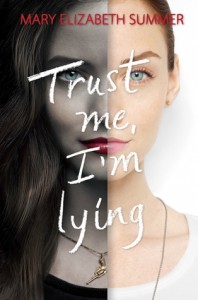 I'm so pissed right now, because I spent forever typing out my review and then the GR app timed out on me and now my long, detailed review has been lost. *insert angry curse words here*

Anyway, here's the general gist of what I had;

I was really looking forward to Trust Me, I'm Lying, but it turned out to be slightly disappointing.

Firstly, Julep acts pretty stupidly for a con woman. She lets her guard down so many times it's very lucky she Disney didn't (stupid autocorrect!) end up dead. Even after her apartment is broken into and ransacked, she still acts pretty dangerously and recklessly. She also tells Tyler some pretty personal stuff after barely knowing him.

Speaking of Tyler....The effing insta love between him and Julep was ridiculous. I didn't like it at all. Not to mention there's a goddamn love triangle between Tyler, Julep and Sam! The obvious choice is Sam, the best friend who is always there for Julep to help her out and is clearly in love with her (she's clueless to this though).

Also, I was intrigued by the notion of crime and cons but there was lack of that and I am not happy.

Overall, disappointing. But it wasn't bad, so three stars.

Sorry if my review isn't too well-written. I had something better planned, I swear. But I lost it.

Here's a really great review by my GR friend Cait Grace. It pretty much says everything I wanted to: https://www.goodreads.com/review/show/866423516?book_show_action=false&page=1