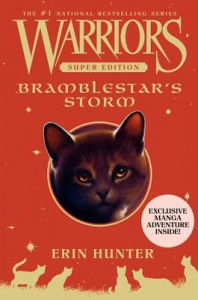 Geez, where do I start?

Firstly,Octavia's review says everything that I wanted to. Go check that out, because it's a good review. https://www.goodreads.com/review/show/1002977016?
I agree with other reviewers who mentioned the errors. Listen up, people! Mistystar and Stonefur are BLUESTAR'S kits. Graystripe was their friend, and they mentored Graystripe's kits, Feathertail and Stormfur.
Also, Cherryfall is MOLEwhisker's sister, not Mousewhisker's.
If an author can't even keep their own characters straight, there's a problem. I know that there are multiple authors but STILL. Erins, fill your newbie writers in so they don't make stupid mistakes like that.

Now, let me say something about Bramblestar. I really liked his character. It was a honor to be in his head for six books (the New Prophecy books). In this book, he just feels so bland that I'm not even sure if he's the same character. He just has no personality in this book.

Secondly, in the prologue, Firestar

(now in Starclan, bless his soul)

gets a prophecy that he is supposed to give to Bramblestar. Bramblestar gets this prophecy in Chapter 18. That's 56% into the book!

That's the big issue with Bramblestar's Storm. There's no clear conflict, and then working to resolve it. There's a bunch of filler stuff, like tensions with Shadowclan, the flood, bringing in the kittypets, the prophecy. So much random shit happens, but there's not much connection in between each event. The plot was meandering and all over the place.

Overall, Bramblestar's Storm is a decent enough book, but I felt it lacked something that many other Warriors books have. All of those books have heart. They have soul. Does that make sense? It means you can tell that the authors love the story and it makes you love it. But Bramblestar's Storm lacked that. It's definitely not something that I want a newbie to the Warriors saga reading. There are so many better books in the Warriors saga. Before any rabid Warriors fans come to attack (I don't think any of you will, but just in case, I'm adding a disclaimer), let me just say that I myself am a die-hard Warriors fan. I LOVE this series. Just because I didn't love this book in particular does mean I like the series any less.