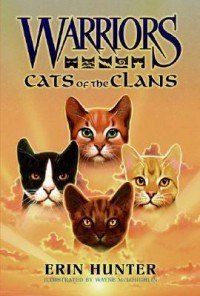 God, I love the Warriors series.

If you haven't read the whole series (like, the entire Warriors arc, not just the first six books), then maybe skip this book as there are a few spoilers.

Before Cats of the Clans, my last Warriors book was read two years ago. Two freaking years ago!

But I'm planning on re-reading the entire series, so I figure this would be a great refresher.

And it was a great refresher. I felt a great sense of nostalgia while reading this. I was reunited with all my favorite characters, like Firestar and Graystripe and Bluestar and Yellowfang. Also some of the newer characters, like Brambleclaw and Leafpool and Jaypaw.

No one in the Omen of Stars sub-series is in here (like Dovewing or Ivypool), but I'm pretty sure there's a newer Warriors encyclopedia that has them in it.

I am so grateful for the illustrations. I have a hard time picturing animals so this was extremely helpful. Now I know what the main characters look like.

Overall, Cats of the Clans is a great read for Warriors fanboys and fangirls.

I wouldn't recommend it for people new to the series, as there are some spoilers. If you want to start the Warriors series, here is the complete list of the MAIN books (and it's a LOOOONG list so feel free to only read the first six books. Also, I did not include the Dawn of the Clans books or the Super Edition novels because they can be read independent of the main Warriors Arc)