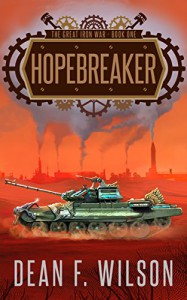 Hopebreaker had an interesting concept, but I don't think that it was as executed as well as it could have been.

Firstly, I couldn't connect with any of the characters. Jacob, for instance, could have been a very complex character character, but instead he was bland and not very interesting. Taberah also had the potential to be a three-dimensional character, but instead was kind of boring. I also didn't like that one character suddenly became a villain in the middle of the story. It was abrupt and didn't make any sense. Don't even get me started on the very forced and unrealistic romance between Jacob and Taberah. They literally sleep with each other after knowing each other for a day. Gross. Insta-love at its finest.

The ending was also very abrupt and totally a cliffhanger. I'm guessing there's probably a sequel. But unfortunately, I don't think I'll read it.

I also noticed a few grammatical errors like using "who's fortune" (page 181) instead of "whose fortune". But whatever, grammar is a minor thing.

The main issue I had with Hopebreaker was that I was so incredibly bored reading it.